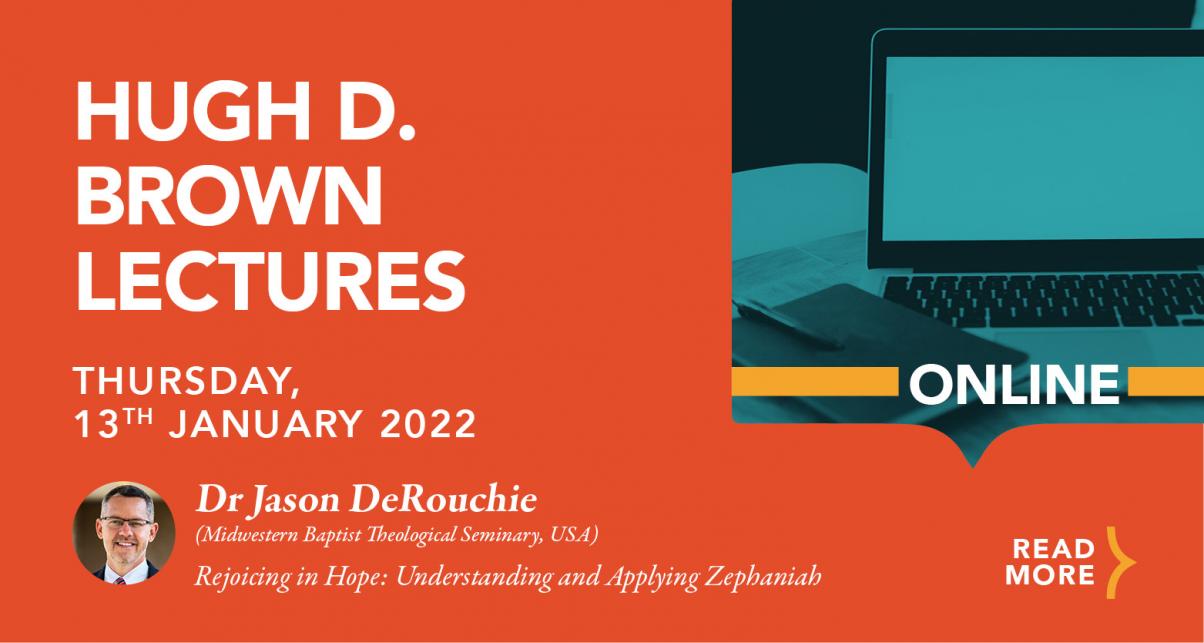 Beyond the beautiful words of Zephaniah 3:17, sometimes quoted on inspirational greetings cards, my familiarity with Zephaniah was fairly limited. I’d read and perhaps understood some of it in a superficial way years ago and had a vague recollection it was concerned with ‘the Day of the LORD’ but I could not have said more. So, it was with a feeling of stepping into the unfamiliar that I chose to attend the online lectures on it given by Dr DeRouchie.

I was glad I did. While zoom has its interactive limitations, what a gift of technology it is to be able to have a brilliant speaker give live lectures from an office in Kansas right into our homes here as if we were in the room with him, and be caught up in some of the thrill of discovery in unpacking the meaning of a text guided by someone saturated in the study of it and other Old Testament books. Multi-layered, unpeeled like an onion, brimming with cross-references to other parts of the Bible, aside from providing more understanding about Zephaniah itself, the lectures helped to reinforce the wider truth that the Scriptures are living, God-breathed, rich and inexhaustible.

And even further, that Christ—the Redeemer and also the agent of Yahweh’s Final Day—is present throughout the Old and New Testaments. In Dr DeRouchie’s opinion, Zephaniah is the climax of the twelve Minor Prophets, and, in Luther’s, the clearest prophecy of Christ’s messianic age. The book’s message is a profound one of dread and hope, with Jesus at the centre.

What follows are a few brief gleanings which I took away from each lecture.

The first verse wasn’t to be skipped over, it bursts with significance: this is the ‘word’ of the LORD—Yahweh is the source, it is, therefore, living and authoritative. Zephaniah, the son of Cushi, has royal blood and the name ‘Cushi’ suggests that he was bi-racial (Black-Jewish), from Ethiopia. He wrote during the reign of Josiah (640–609 BC), the spiritually reforming king who followed the evil Amon.  This is the setting. And while the impending ‘Day of the LORD’ is likely what transpired in 586 BC, the multiplicity of allusions in the writing speak to a higher-level eschatological Day of Wrath.

The people are to seek the LORD together to avoid punishment. The opening verses about the coming judgment on Judah contain strong echoes of the flood narrative (Genesis 6–7) but with a ‘de-creation’ towards chaos which reverses the order of creation laid out in Genesis 1—man and beast to birds and fish will all be swept away; idols will become ‘rubble’.

This was a message to the leaders in Jerusalem—idolatrous priests and ones not operating as they should; star worshippers; those who swore by other gods but who also gave lip service to the LORD; those who failed to rely on God and showed covenant disloyalty: people and rulers who lived like deists or practical atheists as if God was not really present.  In v. 7 the call is for silence before God: the prophecy emphasises how God takes sin seriously. He must because he’s just, and great fury will follow. Where there’s sin there’s retribution, and so the warrior king will act decisively, there will be a day of cataclysm, conquest and sacrifice. The Day of the LORD will be awesome and terrible but right order will be brought about by atonement and sacrifice.

Through careful exegesis, DeRouchie described how chapter 2 speaks of gathering (‘bundling’) the people together before the anger comes—giving hope before the decree takes effect, with a turning away from self-reliance to surrender; urged to seek righteousness and humility for God’s judgment is near. In the New Testament, we hear an echo of this in Jesus’ words, ‘Seek first the Kingdom of God and his righteousness’ (Matt. 6:33).

DeRouchie concluded: allow the seriousness of the Day of the LORD to move us; revere God; pursue righteous living; commune regularly with brothers and sisters by gathering together, finding strength in united surrender (later echoed in Hebrews); and turn to God in radical dependence—fleeing from God by fleeing to him.

In the second lecture, which made the heart swell, our attention was focused on waiting for the LORD in order to enjoy satisfying salvation. The text takes a major shift from the promise of God, the God of armies who will punish the wicked and those hostile to him, to the remnant of faithful people. They will wait for the LORD in hope, confident that he will act. Cross-referencing 2 Peter 1:4, for those who have escaped corruption because of sinful desire and moved towards God, the Day of the LORD is a day of renewal and re-creation. The section from 3:9 on finds echoes in Isaiah 12:4 and Joel 2:32 (also concerned with the Day of the LORD): everyone who calls on the name of the LORD will be saved.

Wonderfully, 3:10 speaks of a reversal of past punishment, a reversal of the dispersal of the nations which took place at Babel. In this verse, Zephaniah references ‘beyond the rivers of Cush’—modern-day Sudan. In Genesis 2, we read that one of the Rivers of Life out of Eden (Gihon) flowed down to Cush. While God will expel the haughty and self-reliant, a ‘humble and lowly’ people will be left and have no more fear. They will be a remnant of new Israel and a multi-ethnic band of people, a reconciled community from every tribe and tongue.

From verse 14 the prophecy turns joyous with imperatives to sing, rejoice, exult, praise—as if the LORD has taken away judgments; the curse of enemy oppression has gone and God’s presence is with the people. An unnamed messenger to Jerusalem says not to be afraid. The Day of the LORD will come in stages, an overlap of the ages, and so the prophecy relates to our ‘church age’—the age of ‘already and not yet’. Christ’s saving work and the church age is the initial fulfilment of Zephaniah’s Day of Yahweh. Jesus is the warrior king; Jesus fulfils the eschatological Day of the LORD.

DeRouchie concluded with an exhilarating exposition of how Christ’s sacrificial death initiates the Day of the LORD for the elect, for those who are ‘in Christ’. He referenced John 11:51–2 when Caiaphas prophesied about Jesus dying for the nations and gathered one people of God (the church). He also pointed to the growth of the early church as described in Acts and how the first Gentile saved was an Ethiopian—alluding to the fulfilment of the son of Cushi’s prophecy; and also John 12:13–15 with its link to Zephaniah in the use of the phrase ‘fear not’ and the prophet’s particular use of the ‘daughter of Jerusalem’ terminology.

A short Q&A session, chaired by Dr Sarah Dalrymple, allowed a further exploration of these wonderful themes and how Zephaniah draws on Genesis, Isaiah and Deuteronomy (especially the renewal of Deut. 30).

I came away with a moving sense of how significant the multi-ethnic nature of the church, Christ’s bride, is; of how, as DeRouchie said, we live in a beautiful yet broken world. We live in an overlap of the ages before all evil has been eradicated completely and that we must—together—hold on to the one who is faithful, humble ourselves, cast our cares on the Sovereign God and on Christ the warrior king. If we died with him, we will live with him.